The formation of oxygen into ozone occurs with the use of energy. This process is carried out by an electric discharge field as in the CD-type ozone generators (corona discharge simulation of the lightning), or by ultraviolet radiation as in UV-type ozone generators (simulation of the ultra-violet rays from the sun). In addition to these commercial methods, ozone may also be made through electrolytic and chemical reactions.

Ozone is a naturally occurring component of fresh air. It can be produced by the ultraviolet rays of the sun reacting with the Earth's upper atmosphere (which creates a protective ozone layer), by lightning, or it can be created artificially with an ozone generator, the ozone molecule contains three oxygen atoms whereas the normal oxygen molecule contains only two, Ozone is a very reactive and unstable gas with a short half-life before it reverts back to oxygen. Ozone is the most powerful and rapid acting oxidizer and can oxidize all bacteria, mold and yeast spores, organic material and viruses given sufficient exposure.

The advantages of using Ozone include; Ozone is primarily a disinfectant that effectively kills biological contaminants.
Ozone also oxidizes and precipitates iron, sulfur, and manganese so they can be filtered out of solution.
Ozone will oxidize and break down many organic chemicals including many that cause odor and taste problems.
Ozonation produces no taste or odor in the water.
Since ozone is made of oxygen and reverts to pure oxygen, there is no residual disinfectant.

The disadvantages of using Ozone include; Ozone treatment can create undesirable byproducts that can be harmful to health if they are not controlled (e.g., formaldehyde and bromate).
The process of creating ozone in the home requires electricity. Ozone is not effective at removing dissolved minerals and salts, the effectiveness of the process is dependent, on good mixing of ozone with the water, and ozone does not dissolve particularly well, so a well-designed system that exposes all the water to the ozone is important. 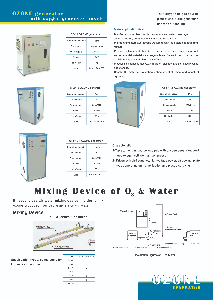